New full-range drivers are a big deal in my world. So I was quite intrigued when DIY Audio's Mark Cronander directed my attention toward the Scandinavian Audio Labs (SAL) design. He tells me that at the 2015 edition of Burning Amp Nelson Pass brought a pair of these drivers with him. Mark recalled that they had impressed Nelson as perhaps the best all-around full ranges he had heard to date. And Mark thought they were very fine sounding as well. I’m always on the lookout for new and interesting full ranges, so with those testimonials in mind it didn’t take me long to connect with SAL’s Frank Jensen and arrange for a pair of loaners. 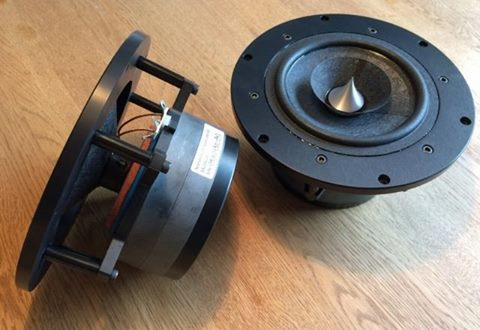 Technical details may be had at SAL’s website: http://scandinavianaudiolabs.com/. The following technical description is lifted off the website.

The SAL08C08 is a 6.5” full-range driver in an 8” basket and features an aluminum phase plug. The basket is CNC made from 10 mm aluminum. The unit is special designed for use in open baffle systems or in large closed cabinets.

The cone is made from a very light weighted special fiber material, with excellent audio properties. The whizzer for high frequency reproduction is directly coupled to the voice coil. The surround is made from a flexible and stable foam material.

The magnetic design is an under hung type. Two large 140X60X20 mm ferrite ring magnet produces 1.4T in the 9 mm high magnetic gap. The magnetic structure is optimized for maximum linearity of the flux in the entire height of the magnetic gap.

The large, open weave Nomex spider reflects very little acoustic energy to the cone, and offers excellent stiffness linearity. Also a damping ring has been added to the spider. This reduce the amount of energy reflected from the chassis to the voice coil.

A heat resistant, non-conductive glass fiber coil former allows a high mechanical Q of the moving system for the voice coil. The coil is winded with CCAW.

These drivers are said to be designed for open baffle loading in a two-way system, crossing over at 100-200Hz, but may also be used as a stand-alone in large boxes. On paper this driver seems ideal for an open baffle application with a Qts of 0.81 and a free air resonance (Fs) of 70 Hz. The cone is exceedingly lightweight (7.4 gram), in fact, you can see daylight right through the cone’s fiber material. Coupled with a hefty magnet structure the resultant sensitivity is a very respectable 94dB SPL @ 2.83Vrms. Unlike the Lowther designs which eke out a few additional dB of sensitivity by sacrificing voice coil excursion, the SAL full-range offers a robust linear Xmax of 5.5mm versus the Lowther’s +/-1mm excursion limit. This is a big deal and facilitates a crossover frequency in the upper bass with minimal power compression.

I decided to drop the SAL drivers into the VISATON NoBox open baffle which served me well during the OB2 project. The basic idea was to replace the Feastrex D5nf with the SAL in order to become acquainted with its sonic character. If I didn’t like what I heard it would have been a short day in the office for me and a long trip for the drivers back to Denmark. But I was in for a surprise to put it mildly. I braced myself for the “Lowther shout,” those irritating upper midrange cone breakup peaks that most twin-cone full ranges can’t seem to avoid and require taming.

Instead, the SAL full range sounded very listenable right out of the box. Not only that, but it produced a low-distortion sonic signature. I’m referring here to nonlinear distortion products, those like THD and IMD that introduce new frequencies not found in the input signal. Let me make this perfectly clear: the SAL’s frequency response is not particularly uniform in the upper midrange and lower treble, it emphasizes certain frequency bands, at least as measured at 1-meter on-axis. However, at the listening seat these did not detract much from my listening enjoyment. Think of the SAL of having a benign EQ baked in that most of the time is consonant with the music.

The lower midrange sounded absolutely terrific, being alive and engaging. Image outlines were solidly fleshed out within an expansive soundstage. The upper midrange sounded sufficiently sweet to do justice to violin overtones. And above all else, the presentation was cohesive to a remarkable degree, this being a major attribute of full-range drivers. As you might imagine, reproduction of male voice was admirable while the tonality of soprano voice was slightly altered. Overall, I found it difficult to stop listening to the SAL and I realized that it would be worth spending considerable time optimizing its integration with the Hawthorne Augie 15” woofer.

The final two-way crossover is the result of extensive listening sessions aimed at voicing the OB3 to obtain the smoothest sound and the most natural tonality. The networks is quite simple but gets the job done. It isn’t a classic design and you will certainly not find it described in any textbook. It combines a second order high-pass filter with a first order low-pass filter and takes into account both the electrical and acoustic phase of both drivers in the overlap region. The crossover point for the SAL full range is about 250 Hz and is sufficiently removed from its free-air resonance to protect it from over excursion. Both coils are steel laminate types and use 16-gauge wire. The nominal value for the coil in the woofer circuit was 5 mH, but I measured it to be 5.2 mH. The 76 µF cap is made up of three caps in parallel: 56µF Erse X-Pulse + 18µF Jantzen Audio cross-cap + 1.5µF Musicap film and foil. The choice of film and foil bypass cap does make for a noticeable sonic difference. I experimented with a few fairly inexpensive options and settled on the Musicap as being the most musical of the bunch. However, feel free to experiment in this regard with more exotic brands if you are so inclined. 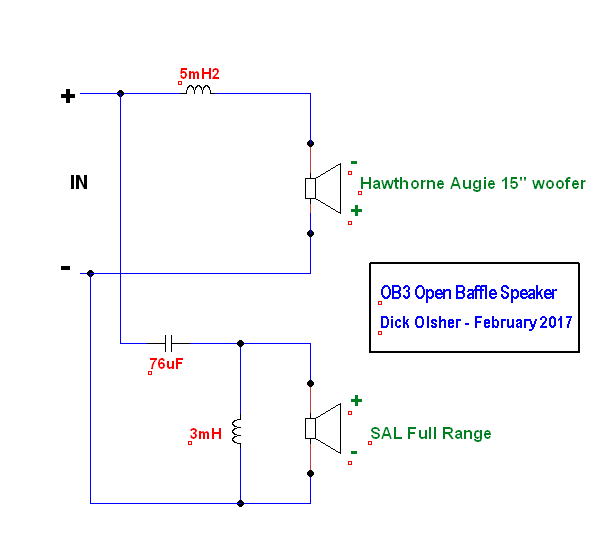 The woofer should be connected with reversed polarity. The frequency respone (in-room on axis at 1-meter) for the OB3 is shown below together with the filtered response for each driver. The response below 300 Hz is dominated by room modes. 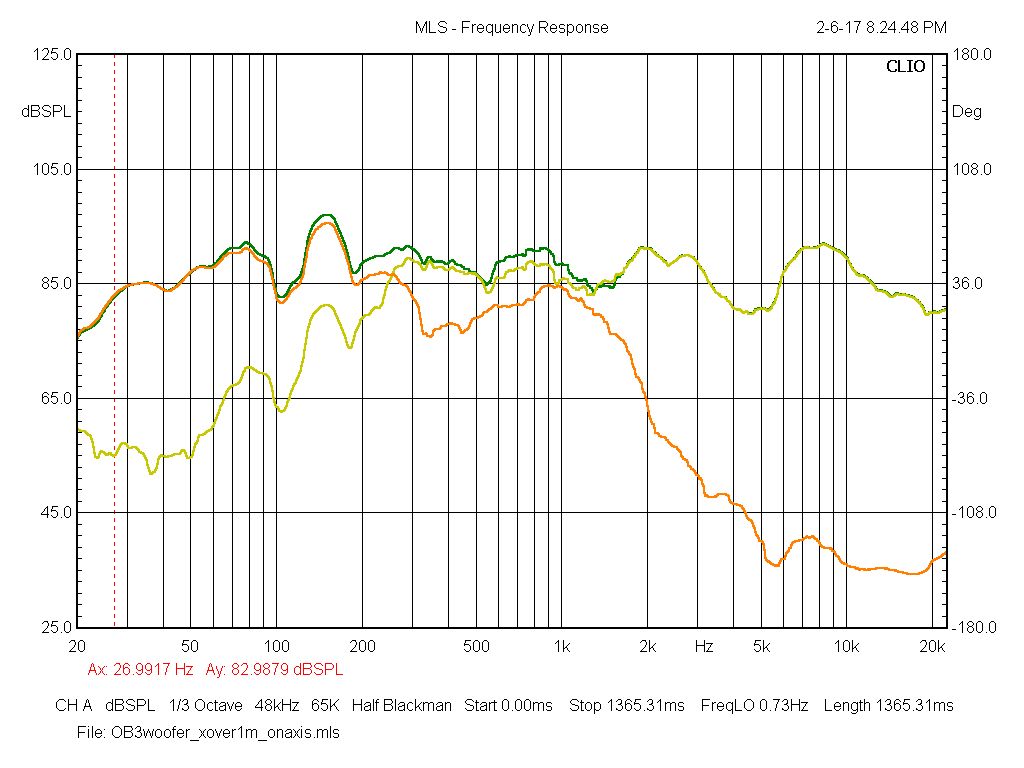 The impedance curve for the OB3 is shown below. The dominant peak is due to the woofer's free-air resonance. 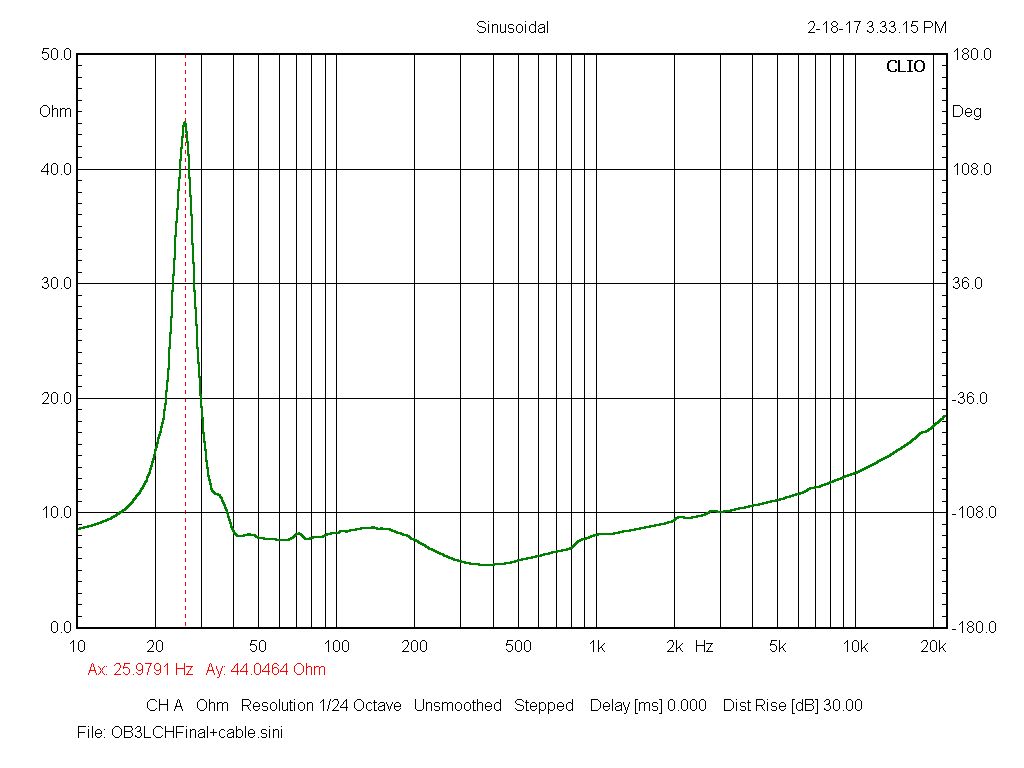 Sonically, the OB3 is head and shoulders above the performance level of the original Visaton NoBox kit. The SAL drivers should be available in the US through DIY Audio. Pricing is not yet set in stone but expect about $980/pr. which would represent a discount relative to the Lowther range for what is a far more natural sounding full range. Just after I finished posting this article I was told the sad news that Hawthorne Audio has closed its doors, but according to Darrel Hawthore there is still a small inventory (on the order of 60 units) of NOS 15” Augies in stock. You may order them by contacting Diana at hawthorneaudio@aol.com or off Amazon. The woofers will be sold until gone and will not be reordered.

If you love open baffle speakers as much as I do I'm sure that you'll find the OB3 sound to be simply delicious! It is currently enjoying center stage in my listening room and I'm in no rush to displace it any time soon.