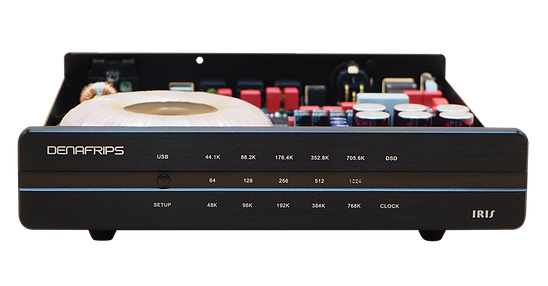 According to Denafrips (www.denfrips.com/iris), the IRIS is their entry level USB digital-to-digital Converter. It leverages the USB audio interface technology found in their expensive Terminator, in which all of the advanced number crunching, including oversampling and filter functions, is performed by a STMicroelectronics microcontroller running an ARM computer processor. Based on my listening tests, the Terminator’s USB decoder is without a doubt far superior to the industry standard XMOS solution. It was consistently capable of extracting exquisite tonal colors without a hint of digital harshness or brightness.

I would bet that the odds are quite high that the Terminator’s USB interface, and by extension that of the IRIS, is superior to that of your current DAC. So, when Vinshine Audio’s Alvin Chee sent me an evaluation sample of the IRIS (~US$516), it occurred to me that testing it in the context of the Soekris dac1421 DAC would be most interesting. I like the dac1421, and having reviewed it for TAS last year gave me a deep insight into its sonic strengths and weaknesses. I had noticed that its SPDIF input sounded superior to streaming files off my laptop via USB. The IRIS made it possible for me to bypass the dac1421’s USB input by converting the USB feed from my MacBook Pro to both SPDIF and optical toslink output signals.

All of the listening tests were conducted in my “inner sanctum,” a listening room dedicated to my Basszilla Platinum Mk2 DIY loudspeakers and single-ended triode amplification. The amplifier on tap was Magi Custom Tube Audio’s SV-811 SET monoblocks (with shared external power supply), built to the specifications of Eric Barbour, as written up in the MAY 1997 issue of GLASS AUDIO. After a brief stint with the Svetlana SV-811 I had switched over to the Svetlana SV572-10 power triode which features a massive graphite anode and a directly-heated thoriated tungsten filament. It was promoted as one of the lowest distortion tubes ever made. It certainly sounds a bit cleaner than the SV-811, at least in this application.

Originally, I was only planning on using the dac1421’s RCA SPDIF input, but then I was surprised by what I heard off toslink since I had never previously considered it as a serious digital input. Textures weren’t as smooth but the jump factor, that is microdynamic intensity, was startling. That initiated a quest to evaluate a few toslink cables, to at least pin down the best sounding affordable option. The differences in sound quality amazed me, quite a range from bad (e.g., AudioQuest Forest) to excellent. My favorite turned out to be the Sys. Concepts 1300-strand optic fiber toslink, 1m length in blue (www.sysconcept.ca).

I was able to switch digital inputs on the fly for quick A/B comparisons, and at times I preferred toslink by virtue of dynamics, and at other times SPDIF because of its smoother textures. In either case, extended listening tests disclosed a dramatic improvement in sound quality. The most remarkable attribute was spatial resolution. Image outlines were fully 3D, as if chiseled in stone. Soundstage depth perspective became cavernous. And resolution of low-level detail was elevated to a level competitive with much more expensive DACs. For example, fortified by the IRIS, the Soekris dac1421 absolutely shredded the latest version of the more expensive Schiit Audio Yggdrasil DAC. Take note: this IRIS DDC is scary good.