With the passing of Dick Sequerra in October 2021 at age 92 high-end audio lost one of its most creative minds. He worked with Saul Marantz and Sid Smith during the 1960s and is best remembered from that period for his innovative Marantz 10B tuner. He was also an avid speaker designer and kept at it for most of his life; his ribbon tweeters having achieved legendary status over the years.

The Pyramid loudspeaker company marked his foray into high-end audio circa 1979. The Metronome 7 was intended as a budget design and was priced at $275 in 1981 when it was reviewed by The Absolute Sound Magazine. In fact, it was awarded a bear-budget best buy recommendation.

Inspired by Sequerra’s legacy, I recently picked up a used pair of MET 7s and spent some time with them. I was especially curious about how they would compare to the Rogers LS3/5A special edition 15-Ohm mini monitors (on loan for review). I don’t always agree with published reviews, but I must say that the 1981 (March/June) TAS review is pretty much spot on. Yes, they are limited as far as bass and treble extension (see frequency response below), but the midrange and presence regions are nicely balanced and sound more natural than what is afforded by the LS3/5A’s ancient KEF T27 tweeter. Imaging is also exceptional, being competitive with that of the Rogers. The big divide has to do with midrange transparency and resolution. The Rogers’ Bextrene mid-bass driver is simply far more transparent and revealing of low-level detail.

The in-room frequency response of the MET 7 at 1-meter is shown in the plot below. The yellow trace in on the tweeter axis while the green one is on the mid-bass driver axis.

The impedance magnitude is shown below. As you can see it's a sealed box design and presents a very easy amplifier load. 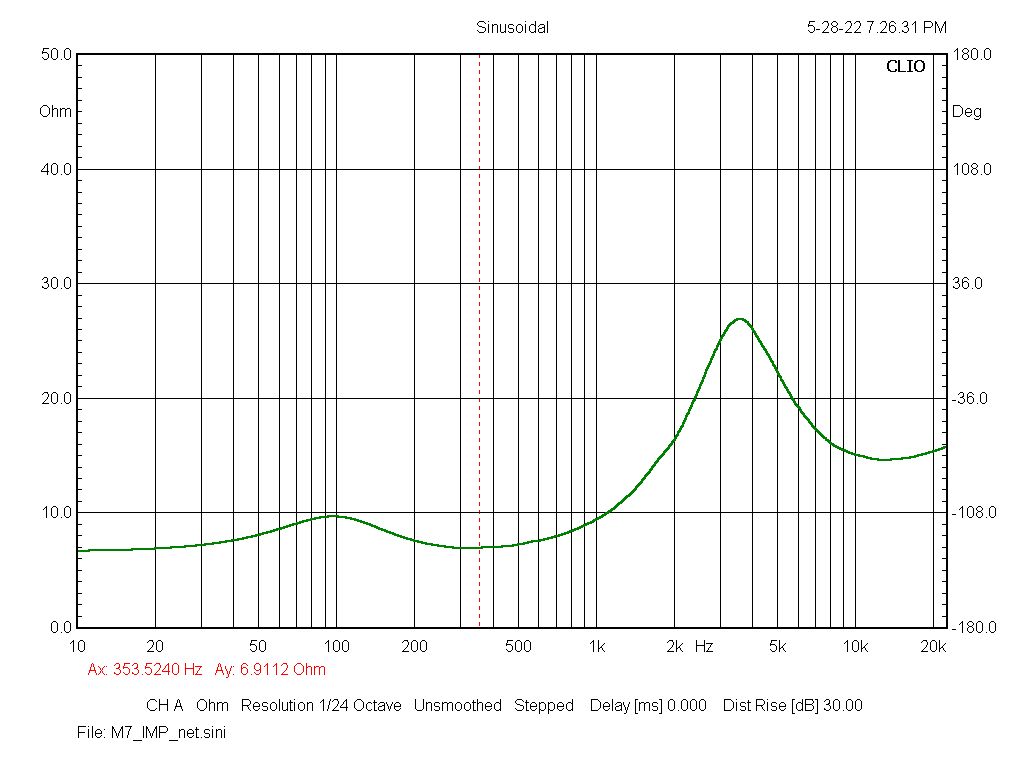 In my opinion, the Met 7 is still a bargain today at under $400 and well worth seeking out for use in an office or second system.